Following the dramatic events of the national elections in the US, you might think that only one issue has occupied Americans over the past week. But Michael H. Shuman, a US localism advocate, believes that another change is pretty important too as he explores in his regular online Commentary on Community Economics.

Civic Revival thought that this further insight from across the Atlantic might well resonate with UK audiences, and so we reproduce Michael H. Shuman's article here:

No, I'm not going to discuss the election here. But a revolutionary change in securities law. Last week, in a 3-2 decision, the Securities and Exchanges Commission (SEC) tweaked a bunch of regulations concerning investment crowdfunding. The headliner change increased the maximum amount a company can raise in a year from $1 million to $5 million, which means that many more mature small and medium scale businesses can now seek funding from grassroots investors. It also opens up opportunities for cities to raise capital for small projects, and for real estate developers to raise capital for downtown development and affordable housing.

I won’t bore you with the details on most of the other changes. People with higher incomes and greater wealth can invest more. “Integration” of crowdfunding raises with other fundraising efforts is now easier. These reforms are all important, but the one change that excites me the most—and almost no one is paying attention to—concerns “testing the waters.” Put in plain terms, this change allows grassroots investors and businesses to have conversations with one another online about the possibility of deals.

Indeed! In the distorted thinking of securities lawyers, a conversation between a business and an investor about a future investment is considered general solicitation. And it can only proceed after massive and expensive disclosure statements are prepared. You know what I’m talking about: Thick, turgid booklets written in a tiny font WITH MANY SENTENCES IN ALL CAPS. No grassroots investor that I’ve ever met has read one of these booklets. And yet without them—and the expenditure of $25,000 or more for lawyers to write them—such conversations have been forbidden.

Honestly, I cannot explain the rationale for this rule with a straight face. If you ACTUALLY are making an offering of securities—if, for example, you're borrowing money from or issuing stock to investors—then you need an investor to be fully apprised about your company. But if you aren’t at the offering stage, if you’re just having a conversation with POTENTIAL investors, if you are thinking about the possibility of making the long journey to engage in crowdfunding, if you are “testing the waters,” what’s the harm in such conversations? In fact, why aren't we encouraging and celebrating these conversations in the name of Main Street capitalism?

Securities lawyers contend you might be giving potential investors insider advantages. Armed with this special information, these investors would swoop in for a deal, long before the rest of the public was ready to join in.

This is complete nonsense. What small business person would not be thrilled if his or her offering was swooped up in 10 seconds by these investors? And if other people want in, they should start their own conversations with their favorite businesses as well.

Even accepting the SEC's logic, the old rule was unnecessary. The SEC prescribes very specific rules for public offerings, including short “quiet periods” before your offering goes public. The passage of time weakens any undue influence of the earlier conversations.

More importantly, we now live in an information era where people and businesses have ongoing conversations about everything under the sun: products, workers, environmental impacts, sales, profits, you name it. When the securities laws were first written, about 80 years ago, most Americans were getting their information through text-heavy newspapers and static-filled radios. Now we get information instantly through the internet and social media, and tens of millions of Americans informally share their views about millions of businesses every second. To believe that a government agency can meaningfully control the flow of such information is pure folly.

Let me give you a specific example of how this silliness plays out. You may have noticed at the bottom of these blog pieces a PPS about a project I started with Stephanie Geller called the Maryland Neighborhood Exchange. The idea of the Exchange is to educate, mobilize, and assist local businesses in Baltimore interested in federal crowdfunding and local investors interested in supporting them. Over the past year, we have helped introduce about $200,000 of investor capital into 20 local businesses, most of them run by people of color.

Right now, we are allowed to list on our site companies that have jumped through all the hoops for crowdfunding offerings. For example, you will find a small description of a company called Neighborhood Sun, which invests in community-shared solar equipment. Click on the link, and you’ll be taken to an offering on WeFunder, one of the largest federally licensed crowdfunding portals.

Since our own site doesn’t have this license, we cannot make the investment transactions happen ourselves. No complaints about that. What’s unreasonable is that we have been forbidden to put a more comprehensive list of all Baltimore solar companies on our site, and encourage interested Marylanders to indicate whether they might, in theory, be interested in supporting these companies. This leaves these companies completely in the dark about their prospects with grassroots investors. They don’t know if it’s worth their time to invest many hundreds of hours into crowdfunding campaigns.

Under the old SEC rules, if we at the Maryland Neighborhood Exchange facilitated such conversations, the SEC and state securities regulators would shut us down, sack us with huge fines, and make us radioactive for future investment work.

What happened last week is that the SEC finally has conceded that this framework is obsolete. It now will allow any website to facilitate conversations between businesses and investors before any offering is contemplated as long as a very simple disclaimer is shown to everyone. Basically: no current offer of securities is being made; no money can change hands yet; no obligations can be made. Easy peasy.

There’s only one problem: The SEC has not preempted the contradictory state laws almost every state has. So if the Maryland Neighborhood Exchange follows the SEC’s new rules, the Maryland securities regulators could nevertheless shut us down and fine us. Thanks for nothing, SEC!

We will petition the Maryland Department of Securities to change its regulations to mirror the federal regulations. Meanwhile, we also will ask them for a waiver. Stay tuned here for progress.

This story underscores how change proceeds in the world. Three steps forward, two steps backward. Not unlike last week’s election.

NB You can order Michael H. Shuman's latest book about investing in localism, Put Your Money Where Your Life Is, through Bookshop.org.

Opposition to proposals for the future development of Warrington by the District Council have brought six Parish Councils together in their campaign. The local campaign group unveiled their own new plan ideas at the end of October under the title 'A New Plan for a Changing World’ 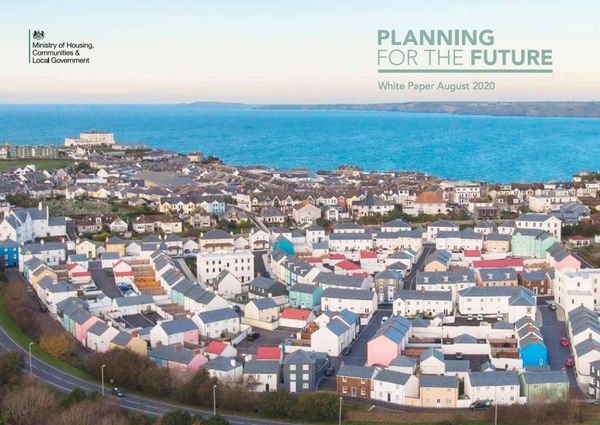 The Housing, Communities and Local Government (HCLG) Committee at the House of Commons is asking the public to take part in a survey on the planning system in England and the government’s proposed changes to it.