It was probably just a bit of gentle mischief to offer ‘this was a life-changing experience’ as one of the tickbox options on the feedback form for a workshop event held on a mizzly February day in Bradford, West Yorkshire.  But for me, it really felt like it was.  This is one of a pair of linked reports that tries to set out why, and how it will influence this new website and project, Civic Revival.

Neither is an entirely conventional report.  This, the first is not so much a minute of the proceedings, as an attempt to record some of the people, places and stories told about ‘high streets’ across England both at the Bradford workshop in February and also at the next workshop in the series in April, which should have been held in Plymouth but, due to the coronavirus lockdown, was held (where else?) on Zoom.  The second is a more personal reflection on the Bradford workshop, entitled Bradford – a life changing place.

The two events were put on by Stir to Action magazine, Frances Northrop of the New Economics Foundation (NEF) and Power to Change, the lottery-funded charity aiming to grow the number of community-owned businesses in Britain.  The Bradford event was hosted at the Kala Sangam centre with the support of the City of Bradford, the Bread and Roses Co-operative, the Architectural Heritage Fund and Co-ops UK.

Stir to Action is based out of Bridport, Dorset and, in its own words, is “building a new economy based on democratic ownership through workshop programmes, strategic economic development, and a quarterly magazine”.  It also runs the ‘Playground for the New Economy’ festival in Frome, Somerset, which may go ahead on 14-16 July 2020.  NEF is one of the most venerable and prolific think tanks in the field of economic reform; its current strapline is: “We work with people igniting change from below and we carry out rigorous research to fight for change at the top. Together we can change the rules to make the economy work for everyone.”

The blurb for the workshop put the problem and the possibilities offered by high streets elegantly:

“Local high streets have gained totemic significance as a bleak lens on what many experience as a broken economic system. With the potential to provide a beating heart for a community – connections into the economy, society, and community infrastructure – the decline of the high street has had massive knock-on effects on public and retail spaces across the UK.  This interactive and collaborative workshop will stimulate fresh thinking and practical new approaches, which communities, local authorities, and the private sector can apply to reverse this decline and reinvent our high street economies.”

Or, as Frances Northrop of NEF pithily puts it:

“Our High Streets are not in decline.  We just can’t get into the buildings and spaces to do the things we need to do to make them thrive.”

At both workshops, the first session allowed everybody attending to speak at some length on who they were, where they were from/who they were representing, and why they had come.  Recording the rich diversity of who was represented is actually the main objective of this report, and is in the section below.  Together, they form a snapshot of what we might call the civic activist movement looks like and does.

Also at both workshops Frances Northrop presented the emerging conclusions from a report in preparation for NEF called ‘Democratising the High Street’, and there was a group exercise or ‘design charrette’ to make a plan for an ideal transformed high street, and feedback from the different groups.

At Bradford, there was a talk by Coops UK on its Community Shares model for community-owned businesses, and by Gavin Richard of the Architectural Heritage Fund (AHF) on their new £15m ‘Transforming Places through Heritage’ grant fund.  Coops UK and AHF are collaborating on the £600k Community Shares Booster programme, which was launched shortly after the Bradford event.  At lunchtime there was a brief tour of Bradford city centre and lunch at the Bread and Roses café and shared workspace in North Parade, and after the workshop there were refreshments at The Corn Dolly pub on Bolton Road.

Frances Northrop’s presentation on Democratising the High Street set out an analysis of the challenges and opportunities, and some practical recommendations for repurposing high streets and making them central places in the development of the new economy.  The presentation summarised a forthcoming NEF report of the same name, the publication of which has now been delayed due to coronavirus.  The report is partly based on focus groups with agents of change/people getting things done in Plymouth, Bradford and Wigan, and partly based on many years of NEF expertise in and advocacy for change in Britain’s high streets, dating back to its 2005 report Clone Town Britain, and beyond.

Democratising the High Street and its detailed recommendations will be the subject of a separate Civic Revival report as and when it does come out, but the following headline findings presented by Frances give a flavour of how the work links the lived experience of trying to get things done on the high street to a broader analysis of our current ‘broken economic system’:

The following list is compiled from jotted notes and may contain mistakes and omissions, which I would be delighted to correct.

Links to some organisations’ websites are provided, and the brief summary of what those organisations do is taken from those websites.  The aim is to provide a series of data points adding up to a ‘pointilliste’ snapshot of the new economy and civic activist movements currently relating to high streets in different ways.  One thing to note: rarely are civic activists involved in one project only; they typically are involved in many projects and can wear a variety of hats, depending on the day.

On Zoom, but should have been at Plymouth:

A selection of some community-owned businesses and co-operatives that were mentioned over the course of the day, included:

Some of the high street projects mentioned with respect to Architectural Heritage Fund support included:

North Ayrshire Council is the first Scottish local authority to formally adopt the community wealth building approach (aka ‘the Preston model’), and it launched its Community Wealth Building Strategy on 14 May.

Some of the issues which came up

At the second workshop, during the coronavirus lockdown, the impact of coronavirus on social enterprises and the High Street was of course a matter everyone wanted to and did discuss, but this will be subject of separate Civic Revival pieces and is not dealt with further here.

There is not enough space to report on the design charrette exercise to imagine an ideal repurposed High Street in full.  Suffice to say that good civic activists are wise, positive and practical – and in touch with the real world.  They already ‘get it’ that civic revival is not about the top-down imposition of outside ideas and models.  Using local knowledge and respecting local heritage, culture and tradition is vital.

There is no attempt here to provide a full record of the other issues raised in a series of wide-ranging discussions, but a random selection of points include: 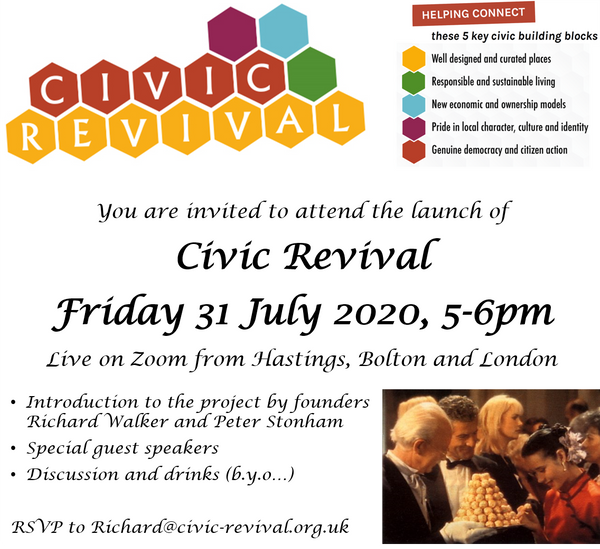 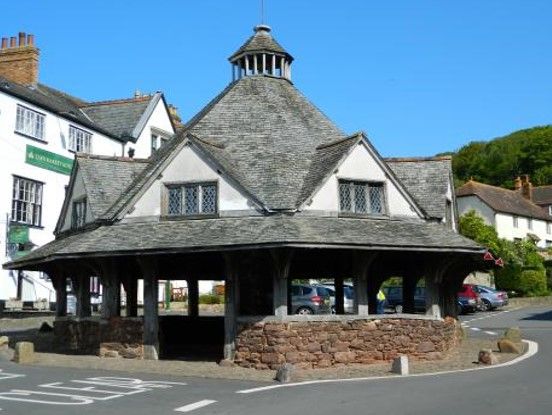 A tour of three places in West Somerset looking for examples of civic activism following the 'Beyond the Fragments' discussion at the Yarn Market Hotel, Dunster in 2018.