A companion piece to Building a New Local Economy: reports from the Stir to Action/New Economics Foundation workshops 19 February & 22 April 2020

Bradford: a surprising place, as they used to say.

February 2020, pre-coronavirus.  Walking down from Bradford Interchange station at 11pm and into – what?  Is it the North of England’s largest mill town, or its smallest regional commercial capital?  A bit of both probably, but it is definitely England’s least rail accessible major city, and as a result you feel almost that you have stumbled upon a forgotten city.

Checking in to the independent, locally-owned Bradford Hotel is to be reminded that not only was Bradford the ultimate Victorian Yorkshire woollens industry boomtown, with a fabulous built heritage to match, but also that it was thriving well into the 1960s/70s.  Situated on Bradford’s premier boulevard Hall Ings, just opposite the Norfolk Gardens and the City Hall (itself built in 1872 to outdo Florence’s Palazzo Vecchio), the hotel is a modernist block that speaks of a city which in the 1960s was confident and investing in its own future.  In Birmingham or Manchester the hotel would probably have been left as bare concrete and would likely be looking pretty sorry today.  In Bradford, they faced it in stone – Yorkshire millstone grit to match the Victorian buildings around it – and it has stood the test of time.

But a premier business hotel in a city where not much premier business gets done anymore has an inescapable air of melancholy.  B&B for under £50.  The cocktail lounge, that would in the 1970s have been a prestige watering hole for Tyke tycoons in the mould of Sean Bean’s John Dawson in Red Riding, is empty.  There’s only room for one corporate metropolis in West Yorkshire and Bradford city centre has comprehensively lost out to Leeds.

The following morning, walking through the city centre to the Kala Sangam centre for the Stir to Action workshop, begs the question: where is everybody?  Where indeed are any shops that are not shuttered up?  It’s a fine walk past the City Hall, through the Centenary Square with its fountains and pavilion (home to Wetherspoons), then down Bradford’s historic commercial streets including Ivegate, Kirkgate and the magnificently-named Hustlergate, but this is a big city that was doing spookily empty long before coronavirus hit.

One answer is found in the city centre’s Broadway shopping mall, built by Australia’s Westfield and opened in 2015: all the usual chain stores have vacated older premises on the streets outside and moved into it.  The mall was most famous for being a hole in the ground for about a decade, a victim of the 2007/08 great financial crash.  It was something of a miracle to have got the thing built and open at all in a city centre commercially struggling as profoundly as Bradford’s.  As these places go, it’s not the worst, so congratulations Westfield and Bradford City Council.  But it is hard to imagine that the place is making much money for anyone: landlord, financiers, retailers or council.

Then it strikes you: who cares about chain retail anyway?  Bradford’s amazing Victorian commercial buildings and characterful city streets have seen the boring chains flee and now stand there ready for a new life.  They are, in the estate agents’ patter, pure potential – quite literally nothing but potential.  How exciting shouldn’t that be?  Rents should have fallen to next to nothing and a playground created for England’s youngest city (in demographic terms): a blank canvas on which young, independent, ‘new economy’ businesses can paint new ways of making a living and enjoying life.

So is it happening, or isn’t it happening?  If so, how?  And if not, why?  Into the Kala Sangam centre, originally built as Bradford’s General Post Office, to find out.  Kala Sangam (‘meeting place’ in Sanskrit) is an arts centre that represents a substantial contribution by Bradford’s South Asian community to the life of the city.  It’s a nice re-use of a solid old Victorian building, and the clocktower room where the workshop is held enjoys the calming tick-tock of the old Post Office clock.

What happened at the workshop is reported here, but it is worth repeating that the host (New Economics Foundation’s Frances Northrop) made a big impact on me with her opening statement: high streets across England needn’t be dying, it’s just that the people and enterprises who could and would do things to give them new life are being actively kept out.  It’s a bold claim.  Why such madness?  How can it make sense to leave buildings empty and smother enterprise?

Knowledge and understanding of how the system works is scarce, and the number of public-spirited people asking questions that challenge the system is low.  Frances Northrop is one of the few people on the scene pointing towards answers.  Absentee owners: faceless institutions, shell companies registered offshore, dodgy operators both local and foreign.  Gatekeepers: estate agents with impossible tenancy agreements, portfolio managers, insurance companies, big four accountants, banks with central computers deciding who can access working capital.  Public sector austerity: in the North, especially in places like Bradford, councils were the local public institution that got things done; now they have been laid waste.  Also, general austerity: so many people in Bradford are poor.  Too many have no savings, no security and no cash to spend.

Ultimately the problem is what academics call ‘financialised capitalism’, the extractive economy, the rentier economy: running the world for the benefit of the 1% who own the paper assets rather than the 99% who don’t.  It is more important that a building in Bradford has a fictional book value of x on a bank’s computer in the City of London than it be put to productive use in the real world.  This is what Stir to Action call the bleak lens on a broken economic system.  Or we might call it the final degeneration of Thatcherism, an insane and corrupted system that would have repelled grocer’s daughter Maggie herself.

So, just need to overthrow the financialised capitalist system, and Bob’s your uncle then?   What use is that to practical people just trying to get something done in their local town, be it Coalville or Middleton?  In fact, Frances Northrop’s presentation (‘Democratising the High Street’) set out a very practical list of moderate reforms, which could make a big difference in real places.

But February 2020 was before coronavirus: all bets have to be re-set now, and what to do needs to be rethought.  The final report on Democratising the High Street will be reviewed on this site Civic Revival when it is published.  It seems certain that reform will be needed more than ever, and be more rather than less radical.   Indeed (and this is my editorial), absentee landlords may be faced with a choice between being gently ushered off the scene with a reasonable financial haircut or being annihilated in a banking system implosion.  More on this another day.

Bread for all, and roses too!

They are practical people who are getting stuff done.  They know that running a small enterprise is bloody hard work, as indeed is much of the job of ‘landlordism’: building work, renovation, maintenance, project management – difficult stuff which adds real value, and weaves the canvas on which others can paint.

They are also dreamers: people who are driven by a vision of their place as a better place, within a better world, and a dream of how they can live a good life and make a contribution to the public good within it.  Not all the dreams are possible in practice, and not every project is a success, but these guys learn and move on.  They are people that any politician of any stripe will be wanting to get behind, and help out.

Our lunchtime trip to the Bread and Roses co-operative on Bradford’s North Parade was illustrative of this.  North Parade is a street of fine commercial buildings that could have remained just a dying ‘secondary’ retail street; instead it is ground zero of a Bradford revival that has so much more promise than that supposedly offered by the Broadway mall.

Bread and Roses is at one level just a simple café, but at another level it is an information hub and a beacon of hope – about healthy eating and living, demonstrating the new economy in action, and inviting people to join in.  It’s a workers co-operative, so if you get a job there, you have a vote on how the business is run.  If you’re visiting, you can be a customer, but you can also use it a shared workplace: you can just come and hang out.  In the evenings, there are events: entertainment, learning, politics.

I don’t wish to overstate the case: there is nothing impossibly unique about North Parade, and there is nothing particularly original about a coffee shop as a place for freelancers with laptops to hang out – Starbucks have built a global vampire squid of a business on the back of it.  Indeed, there is nothing particularly original about a ‘right on’ veggie café: they’re ten a penny in Brighton’s North Laine or London’s Lower Marsh.  And of course there are issues: if the staff are to pay themselves a living wage, then prices for the coffee and food are going to exclude a lot of Bradford’s people who have no money.

But somehow the vibe is special: the ownership model just gives it a breath of fresh air.  In Bradford, which in some respects is so socially messed up, some people have created an urban village with a real sense of community, and everyone is welcome.

In many ways what Bread and Roses has done is simply to reinvent for our times the Pennine spirit of non-conformism, self-help, independence from central authority.  Co-operatives, industrial provident societies, building societies: none of these new economy things are new, they all sprung from places like Bradford over a hundred years ago.  The new economy is about using them as tools to give people the livelihoods they need in the 2020s.

Bradford can be viewed as an economic and industrial write-off with dreadful connections to London, or it could be viewed as a place where independents can thrive: where people can build what they want to build, be what they want to be.  The big heart of the new economy. With a cosmopolitan, civically-revived city village on your doorstep and the delights of the Yorkshire moors and dales only a short bike, train or bus ride away, why would you want to go to London anyway?

So there we have it: Bradford, the surprising place, and my brief trip to it, the surprising life-changing experience. I couldn’t have asked for more.  Yet essentially there is nothing happening in Bradford that couldn’t be done anywhere.

Can’t every high street and town centre in England offer Bread for all, and Roses too?   Civic Revival’s mission is to find out.  Hustlergate, here we come! 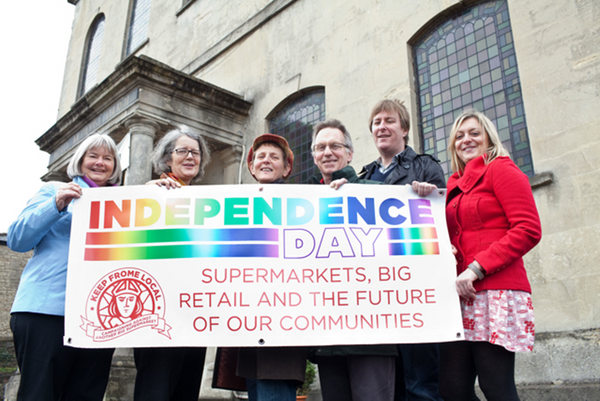 A report on the Independence Day event organised by The Guardian’s John Harris and held in Frome, Somerset in November 2012.

Local Futures works to strengthen local economies that put the well-being of people and the planet first.