In an interesting parallel to the successful citizens' campaign to restore traditional committee-style governance to Sheffield City Council, a movement for the same objective has begun in Leeds. Just days after the local elections, one of the Leeds Labour city councillors has announced he is quitting the party, and will campaign for a committee governance system to be introduced for that council too.

Councillor Paul Drinkwater branded the current system of council governance as being a form of “institutionalised bullying”, adding that individual members’ concerns were not listened to during the ruling Labour group’s decision-making process.

He went on to call for a committee system of council governance, similar to that which has just been voted for in Sheffield, which would see members from all elected groups represented on the council’s decision-making boards.

Cllr Drinkwater’s resignation from the party now makes him an independent councillor, while Labour’s overall majority on the council has reduced to just four.

“I cannot continue to be complicit in the illusion of local government democracy in Leeds. As a ward councillor I have very little influence on the politics of Leeds City Council despite being a member of the controlling group," he posted on his Facebook page.

“The council is run on an ‘executive’ or ‘strong leader and cabinet’ model. This means that the leader who is elected by the controlling group members appoints executive councillors to run sections of the council ‘portfolios’.

“The leader also appoints the vast majority of councillors’ positions which attract ‘additional responsibility allowances’. These enhancements are significant.”

He added that a councillor with no extra allowances is paid £15,228.91 a year, whereas an appointed executive board member is paid more than double that, while other levels of allowances are also available for committee roles. He claimed such allowances create a “culture of patronage” to the leader.

Coun Drinkwater added: “As the former chair of the Fire Brigades Union in West Yorkshire I expected the Labour Group to operate in a similar bottom up way taking its direction from the Labour Party members and citizens of Leeds through its councillors.

“I expected significant decisions to come to Labour group for proper debate, for options to be considered and for a vote to be taken to make collective decisions on issues. Unfortunately this is not the case – the Labour group meets too infrequently to have the capacity to scrutinise executive decisions with issues being brought as a fait accompli.

“It appears that executive members are happy to make decisions on behalf of the Labour group which is then ‘whipped’ in full council meetings into voting through decisions that it has neither had the detailed information on, or any opportunity to consider possible alternative proposals to.

“Above all things I am a democrat. In order to properly pursue the petition and referendum on Governance and to highlight this issue I am resigning from the Labour Party. I am not standing down as a Councillor as I believe that the people of Killingbeck and Seacroft who voted for me will support this action knowing that currently the influence of their councillors is negligible even on issues effecting the ward.

“I clearly stated on my website when I became a Councillor that one of my primary aims was to change the governance of L.C.C to a committee system.

Within these constraints I will continue to perform my responsibilities to my community as a Ward Councillor until the end of my term in May 2022. I will fight for the people I represent and all citizens of Leeds to have the platform and influence they deserve within Council through their elected representatives.”

He posted a link to his petition, via https://www.ipetitions.com/petition/leeds-democracy-petition. 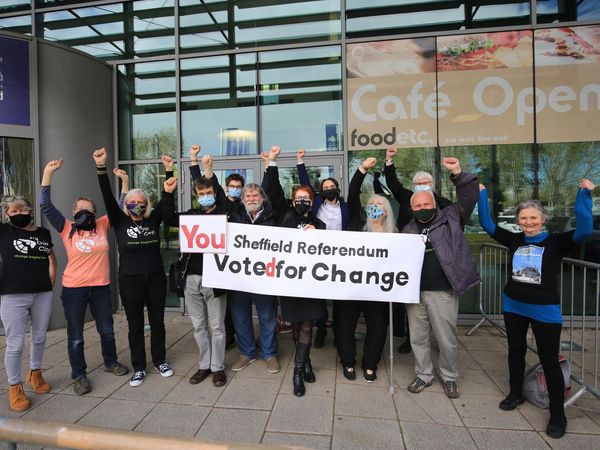 There were significant achievements for activists seeking more democratic control over their areas in the results of the major set of local elections that took place on May 6th. Notable victories came in the Sheffield governance referendum, and the new town council created in Bexhill

Some reflections on the announced closure of 110 branches of Santander Bank UK.