It sounds odd to say it, but localism is a global issue. And some people with strong belief and involvement in globalisation are questioning those who advocate more local economic development.

Michael H. Shuman, a US localism advocate and author of a number of books on supporting local economies, has spotted signs of a drive by such voices to question and undermine the case he makes for community economics by misrepresenting its implications for free trade.

Civic Revival thought that this insight from across the Atlantic might interest UK audiences, and so we reproduce Michael H. Shuman's article here:

Congratulations, fellow localizers! Our arguments are winning! Why else would the globalization elite be going out of their way to attack us?

The lead editorial of the November 7th issue of the Economist skeptically asks, “Why Is the Idea of Import Substitution Being Revived?” Import substitution, of course, is a technical term for localization, where local goods and services replace nonlocal ones. Many economists and developing countries embraced import substitution in the 1950s and 1960s, but used it to justify tariffs against imports, subsidies for “infant industries” at home,” and rules against global technology transfer. These policies, the Economist insists, “are doomed to fail. The consumers, competition and technologies that developing economies can only find on global markets are a crucial prerequisite for their industrialization.”

Another jeremiad came from the Organization for Economic Cooperation and Development (OECD), which produced a study showing that increased localization would depress GDP growth worldwide. The study was then used by two senior economists for the Conference Board of Canada, Julie Ades and Pedro Antunes, to argue: “The COVID-19 pandemic has disrupted product shipments and forced many Canadian businesses to adjust their supply chains. For some, this has involved sourcing more inputs from local suppliers. The current economic hardship has also caused a surge of solidarity from Canadians who are supporting businesses by buying locally. But a strategy focused on buying local is not the solution [for] Canada’s economy needs.”

For its economic model, the OECD assumed that a more localized world required “a global rise in import tariffs to 25%, combined with national value-added subsidies equivalent to 1% of GDP on labour and capital, directed to domestic non-services sectors to mimic rescue subsidies that favour local production.”

Here’s the weird thing. I agree with most of these arguments. No economist should be surprised when higher tariffs and more subsidies depress an economy. But all these policies are part of an import-substitution strategy I would call dumb localization. It has nothing to do with what most of today’s advocates of localization are promoting.

Smart localization is premised on free markets and an open trade policy. Its activities include the following:

In other words, the globalizers have it exactly backwards. They are ones who wish to wreck free markets with massive subsidies, monopolies, and trade distortions. And we must continue to challenge and defeat these destructive policies.

Almost all studies of the impacts of smart localization policies, in contrast, find that they increase income, wealth, and jobs. When a region shifts its spending from imports to competitive local goods and services, the “economic multiplier” is pumped up—and everyone in the region benefits.

The strongest local economy is one that is as self-reliant as possible and maximizes its exports. Some imports are necessary, but every unnecessary import is a drag on the local economy.

Which brings us to a fundamental misunderstanding about localization. Globalizers assume that a community wishes to seal itself off from the world. Nonsense. A strong local economy wants to engage with the global economy, but from a position of strength. Globalizers encourage communities to become dangerously dependent on the importation of many goods and services they could easily make for themselves, and thereby undermine the resilience needed to ward off the next pandemic like COVID-19.

What would happen, many ask, if every community in the world localized in this way? Wouldn’t a world of more localized communities have less trade and then make everyone poorer? Not at all. The global economy is not a zero-sum game, and smart localization should be considered an act of increased efficiency. And if every community became more efficient, the world would become more efficient and wealthier. Ironically, a world of wealthier, more localized communities might experience more trade—it would just be trade in more exotic goods and services most communities could not cost-effectively make for themselves.

Let me give a simple example from my own life. Twenty years ago, my then spouse and I moved our mortgage from Bank of America to a local credit union. That act of localization saved us money, and with some of the savings I spent more on my favorite import—single malt scotch whiskey. By localizing my banking, I had more money to expand the world’s whiskey trade.

The paradox of worldwide localization is that it could actually increase trade—but trade would be more focused on things that communities could not cost-effectively provide for themselves. What communities can provide cost effectively for themselves are most services and most commodities (like soybeans) that weigh a lot and have a low dollar value per unit weight (and therefore vulnerable to rising shipping costs).

So, no, Economist editorialists, we won’t abandon smart import substitution policies. And, no, OECD analysts, we don’t believe your studies that knock down ridiculous strawmen of dumb localization. And no, Conference Board of Canada, your economists really don’t have a clue about the value of local purchasing and why a growing number of Canadian businesses and politicians are embracing it.

NB Michael H. Shuman has written a number of books about investing in localism, including Small-Mart Revolution and  Put Your Money Where Your Life Is.

Looking to generate sustainable community wealth? Wanting to support communities to do it for themselves? Ian Case and Deana Wildgoose will share what they are doing in North West Leicestershire and introduce some tools to share and use in your area. 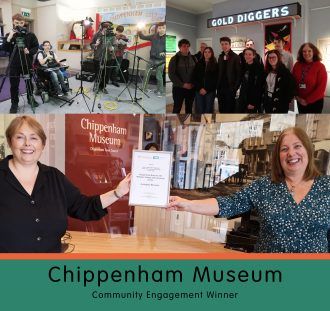 Local projects in Kirklees, Kent and Wiltshire have been named as winners in the 2020 Community Archives and Heritage Group (CAHG) Awards, announced at the end of October.